Can ecology be harnessed to promote restoration and prevent decline?

Can we farm coral?

Can we grow a coral reef?

The Hawaiʻi Institute of Marine Biology (HIMB) Coral Nursery aims to answer these and other questions in support of research and education at HIMB. It started as a pilot project to determine if it is possible to farm coral and improve reef restoration using a floating midwater coral nursery.

The nursery was constructed in 2017 by recycling dolphin and fish pens that were decommissioned. Corals had naturally settled on the nets of these pens over the course of approximately 10 years, these corals were rescued with the assistance and guidance of the State of Hawaiʻi Division of Aquatic Resources (DAR).

The pilot project has been successful, with racks increasing in coral cover from approximately %50 in 2017 to ~80% in 2020 (Figure 2a,b). We have documented recruitment of juvenile fish and coral (Figure 2c). The HIMB nursery has also enabled dozens of student research projects, providing coral to researchers with no harm to the reef.

Juvenile fish began to thrive in this new habitat, doing the hard work of cleaning algae so the corals can grow:

Here is the same rack as in the fish time-lapse video above after two years of growth:

Restoration projects need data to find out the optimal genotype and size of coral to plant at a particular site. Thanks to funding from the Seaver Institute, and the NOAA Coral Reef Conservation Program, and in collaboration with the DAR Coral Nursery, we have developed Coral Growth Assays that can be used in the field to provide this information. The assays use micro-fragmentation to control size and coral genotype on each unit. The assays provide data on which genotype and which size category is optimal for each site.

We are measuring the assays with digital photography and with 3D SfM photogrametry to measure change in surface area and volume:

3D SfM photogrametry of the Nursery

We are experimenting with using 3D photogrametry to quantify coral growth over ~100m2 of coral growing in the nursery. 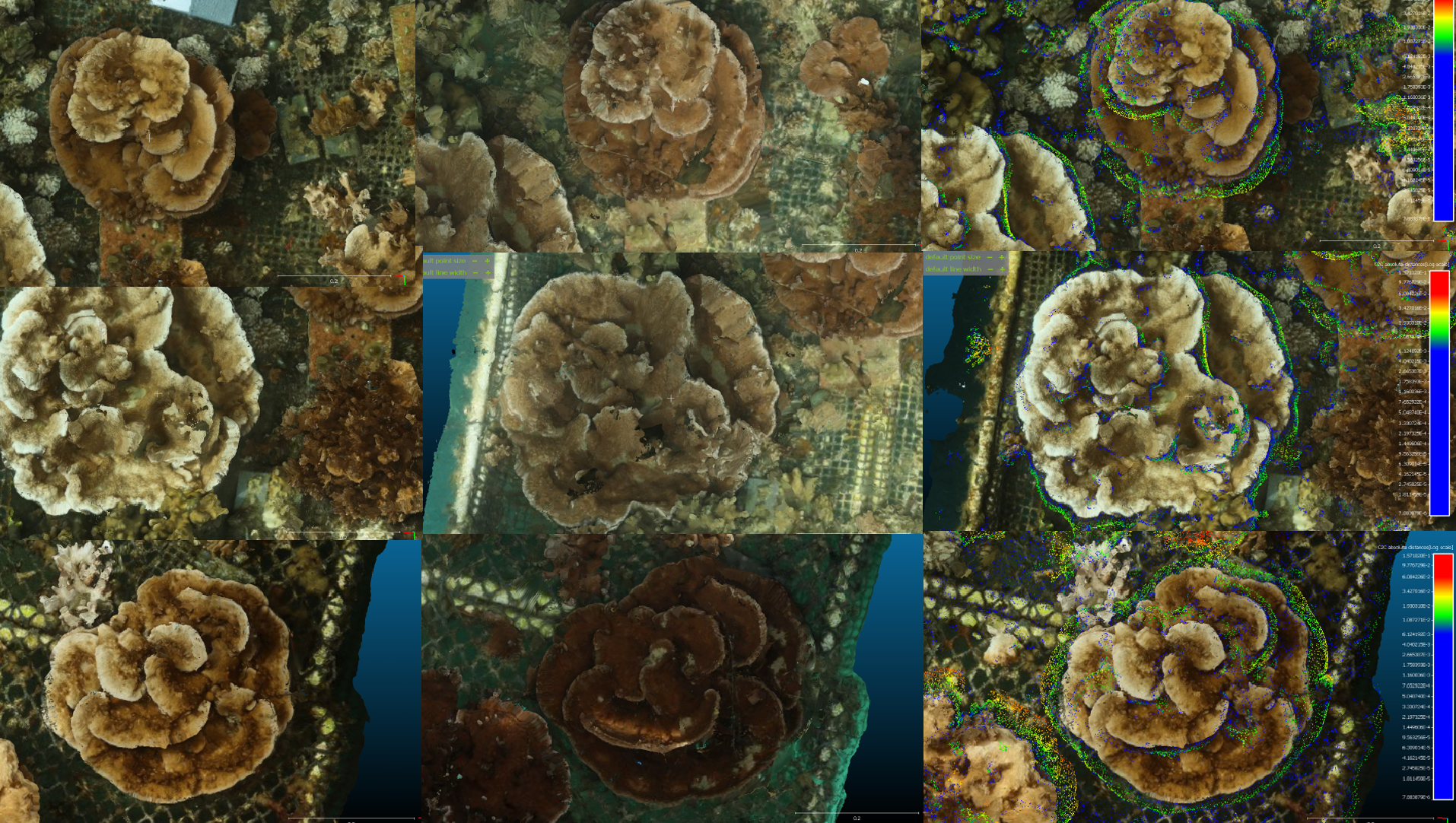 Small tetrapods were designed by SECORE to serve as settlement substrates for coral larvae. Chamberland et al. (2017) documented that these tetrapods reduced transplantation costs by several orders of magnitude by eliminating diver time in the water and the tetrapods wedged into cracks and crevices eliminating the need for epoxy or other attachment methods. We have used micro-fragmentation to cover these tetrapods in both a mid-water nursery, and a land based nursery. The tetrapods could be mass produced in a variety of sizes and micro-fragmentation could be used to produce ‘coral seedlings’. This concept has yet to be tested in the field.